The significance of NodeJS:

The programming languages used by developers are truly something that is dynamic. State-of-the-art languages come so often replacing those that exist. JavaScript is arguably the language which runs on most computer systems since it’s the language of the browsers and since there is a huge community of JavaScript developers and a large amount of resources available.

Like all functional languages, JavaScript shares the virtue expressiveness and its grammar is much similar to Java where large numbers of programmers are from. There are common pitfalls with JavaScript, however, JavaScript never failed the job it was built for, where all other approaches to client side browser technologies failed to do, like java applets.

So, what’s the place of NodeJS among those? NodeJS is a platform based on the chrome’s v8 java script runtime engine. Node’s philosophy is to write programs in JavaScript which will run in host machines, not only in browsers. This expressiveness of JavaScript was not the only reason why Node became so popular in such short period. It consists of much more beneficial factors in addition to that.

“What maven is doing for java, Node Package Manager (NPM) can do better for Node.” NPM is designed to provide full blown dependency management feature for node developers. Npmjs.org is the main node repository where developers can find reusable packages and also publish their packages to use by other developers.

Node is rich in TDD (Test driven development) utilities. Testing frameworks like mocha and assertion libraries are widely in use for this purpose. Web and REST API development is powered by frameworks like expressjs. It shares the Node philosophy of non blocking IO, Asynchronous event processing for fast and efficient web services.

hSenid Mobile APIs along with TAP:

It’s true that there was an era when telco application development was considered to be so intricate, that only the highly technically competent ever endeavored to it. hSenid Mobile have enthusiastically stepped in as an enabler and a catalyst to help developers initiate developing their own telco apps via our revolutionary platform, Telco Application Platform (TAP). Both the developers and the non-developers now have the equal opportunity to mould their app idea and take it to the next level by globalizing it which ultimately results in revenue generation which is truly beneficial for the developer. 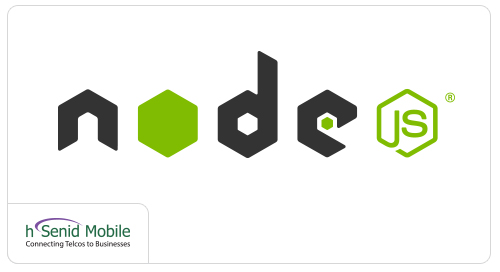 The complexity of telco apps has always been a barrier for the developers and urged them to hesitate before laying the first stone. This has been minimized at its best by bringing in hSenid Mobile APIs making things even simpler and more user-friendly. With the help of TAP, developers can access Telco assets via simple APIs that abstracts complex integrations to the Telco network making app development a piece of cake!

So, why is it trendy to integrate Telco platform and Java Script platform together? Node is becoming popular as a framework to quickly prototype software projects., In every business or industry, including telco application development, market entry time is the key to success. Also it is very hard to guess which idea will make you a millionaire. So it is very important to quickly prototype and shadow-test your ideas. However labeling Node as a prototype builder should not be the only way to introduce Node. Node is enterprise ready to power highly concurrent scalable applications which are very handy when it comes to Telco Application Development!

All in all, if you are a developer who is keen on tapping into an unearthing opportunity within the mobile app market, if you have a great idea, passion, an entrepreneurial drive and challenging attitude to change the phase of the mobile ecosystem, the path has been set for you! The complexity of Telco app development has been simplified using hSenid Mobile APIs so that the telco app developers can now use NodeJS to bring out what’s in their mind.

So, put a full stop to the hesitations. See the power of a simple strive and make a remarkable difference !